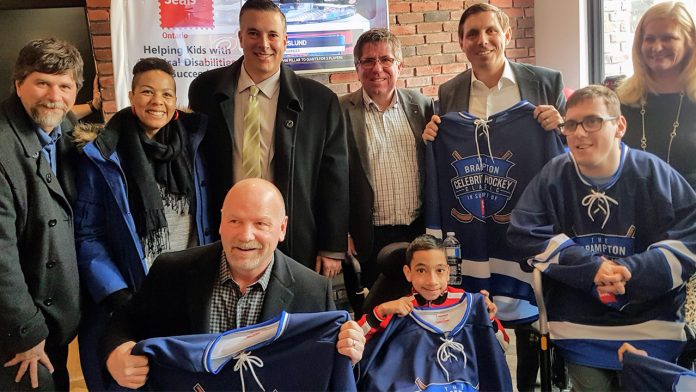 Toronto Maple Leaf fan favourite Wendel Clark was at his namesake restaurant in downtown Brampton today with the Mayor, Fire Chief, Councillors and representatives from Easter Seals Ontario to officially kick-start “The Brampton Celebrity Hockey Classic”. Mayor Brown hopes the event will be an annual event in the city.

The event is a fundraiser for Easter Seals Ontario which helps kids with physical disabilities. Casey MacKay and 11-year old Shamil Sohail were on hand to let participants of the event know that not only will they be playing hockey, they will be providing much needed funds to gives kids like them the opportunity to have a “normal” camp experience.

The event is on May 16th at Cassie Campbell Arena. A pre-event reception at Wendel Clark’s on May 15th will be held for players only including the celebrity players. The event is open to a limited number of teams. Currently, the Mayor has submitted a team on behalf of City Hall. Fire Chief Bill Boyes is also organizing a team and Peel Police is expected to join as well.

Organizers emphasized that “this is not your typical hockey event. Do not worry about your calibre. It is a co-ed event. All we ask is that you be over 19 because there is some beverages involved.” He added that it is “about having a pro-experience.”

Registration and further information can be found at the event website (celebrityhockeyclassics.com).