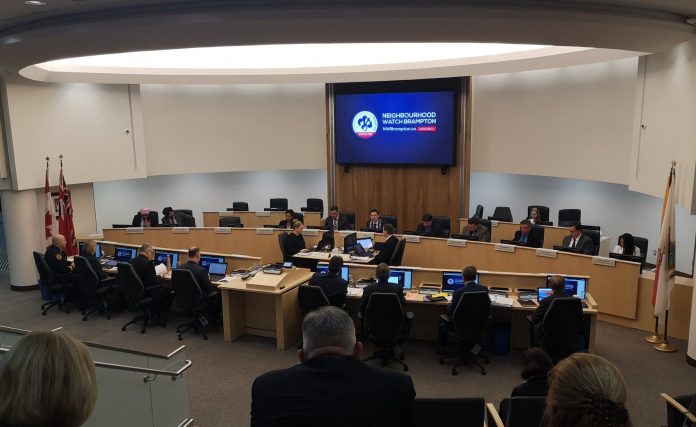 The City of Brampton’s Integrity Commissioner has reported back to council regarding a complaint filed in July 2019 by a failed municipal candidate which accused all Councillors and the Mayor of serious wrong-doings in funding a pilot of Neighbourhood Watch. (Neighbourhood Watch Brampton is a grassroots program initiated and run by Brampton Focus Community Media since January 2017)

Following a thorough eight month investigation, the Integrity Commissioner ruled on a series of allegations from the municipal candidate. The allegations question the integrity of all ten Councillors and the Mayor of Brampton. The complainant also accused Brampton Focus of participating in an “intense lobbying effort” and other corrupt activities.

Among the list of filed complaints were accusations of Council breaching purchasing by-laws, the lobbyist register bylaws, the city’s Code of Conduct rules, and the Municipal Conflict of Interest Act.

The Commissioner, in a 225 page detailed report laid out each distinct allegation along with the findings as follows:

Accusation #2 – “I find that the Councillors and Mayor Brown did not contravene rule no. 2 of the Code of Conduct in participating in interviews with Brampton Focus, just as they do with other media outlets. Since I find that the alleged “in-kind gifts” were not in fact gifts or benefits under rule no.2, there was no need for Councillors or Mayor Brown to register same”

Accusation #4 – “On the basis of documentary evidence, I do not find that there was lack of transparency respecting Brampton Focus, its ability to render services that the City provided funding for, and the relationship between Brampton Focus and the City. Brampton Focus has been clear and transparent with respect to the services it provides and has marketed itself to the public and City Council in various ways.”

Accusation #5 – ” Although the Complainant provided names of three individuals during the investigative interview, it is not my view that those individuals provide services akin to that of Neighborhood Watch” and “and a competitive process was not required. “

The Integrity Commissioner further stated that “while the historical relationship that Brampton Focus has had with Neighborhood Watch may be perceived by some as instigating a positive bias by the City towards Brampton Focus and certainly was suggested by the Complainant, I do not find this to be the case.”

Will the Integrity Commissioner report satisfy the complainant and the many that seem to believe that Brampton Focus has an unfair advantage, is biased, or has ulterior motives? Probably not. There will be those who will spin the report to suit their agenda, get website clicks, sell ads for papers, support a political candidate or run in an election.

We fully responded to the Integrity Commissioners requests for information and interviews. Even a stolen transcript with a full year’s worth of private WhatsApp conversations was thrown at us and used by a local reported to find dirt. Nothing was found to suggest we ever did anything contrary to the public’s trust.

I am proud of what Brampton Focus has accomplished in 6 years. We achieve our goals every day to engage residents in their city and give them a voice. Reposting articles on social media and posting selfies is not engaging the community. Organizing and running townhalls, speaking with community stakeholders on behalf of residents, hosting debates and adding value to community groups certainly is.

Those who take issue with Brampton Focus and Neighborhood Watch often do nothing more than complain. In this case, a series of frivolous complaints were made by a municipal candidate seeking attention, but at what cost to Brampton taxpayers?