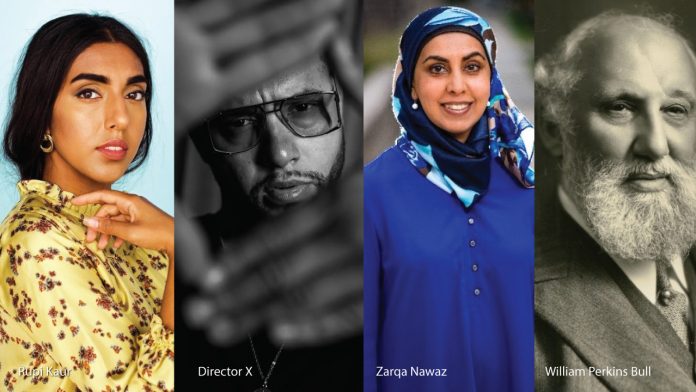 Each inductee hails from Brampton or has spent their formative years in the city. Each has been selected for achieving excellence in the arts and entertainment industry, for building pride in the community, and inspiring emerging artists and creators. Director X – Born Julien Christian Lutz, Director X has been noted for directing high-budget, visually distinctive videos for popular artists such as Drake, Kendrick Lamar, Rihanna, Jay-Z, Justin Bieber, Kanye West and many more. His work has been nominated and awarded by the MTV Music Video Awards and Much Music Video Awards. In 2015, X won Best Feature at the Atlantic Film Festival for his directorial debut, ‘ACROSS THE LINE’, and recently directed the highly anticipated film “Superfly” for Sony, Columbia Pictures, hitting theatres in June 2018. (www.directorXfilms.com)

Rupi Kaur – Rupi Kaur is a poet, artist and performer. Her artistic journey began as early as the age of 5 when her mother handed her a paintbrush and said, “draw your heart out.”  While studying at the University of Waterloo, Rupi wrote, illustrated, and self-published her first collection, Milk and Honey, which has since sold over 3 million copies, translated into more than 35 languages, and landed as a #1 New York Times Bestseller for more than 100 consecutive weeks. Rupi’s long-awaited second collection The Sun and Her Flowers was published in 2017 and debuted as a #1 global bestseller. She’s a Forbes 30 under 30 and named one of BBC’s 100 Women of 2017. (www.rupikaur.com)

Zarqa Nawaz – Zarqa Nawaz is the creator of the 2005 ground-breaking documentary Me and the Mosque, and the hit comedy series, Little Mosque on the Prairie that ran on CBC Television between 2007 and 2012. Most recently she has written a bestselling comedic memoir, Laughing All the Way to the Mosque, in which she explores what it was like to grow up as a Canadian of Muslim faith. Nawaz currently hosts CBC’s The Morning Edition. www.zarqanawaz.com) This brings the number of Walk of Fame inductees to 21 since 2014 when the program was started. Due to the scheduled construction commencing in downtown Bramptin this Fall,  the actual “Stars” will not be laid this year.

For a list of the inductees and events, visit Brampton’s Arts Walk of Fame.